I Thought My Life Was Over…

Posted on October 5, 2018 by DorothyMarie

I know that I’ve discussed this before, but I thought that I would talk about it again.  That is my divorce.  The reason is because I really want people to know that despite how awful it feels at first, life does go on.  I’m proof.  The thing is, I should’ve seen something wasn’t right a long time ago, but I was too afraid.  I didn’t want to be a single mom and I believed so strongly in my vows of marriage.  I had great grandparents that were married until death did they part and that was 70+ years.  That’s what I wanted for my life.  So, in 2005, when my now ex first strayed from the marriage I was devastated and completely heartbroken.  He did move out for a while and in with the young woman he had an affair with.  The young woman was a mutual friend we both knew and I was so hurt.  I remember when he told me. It was the month of September and I’m pretty sure it was the 18th.  I cried and I ran next door to the neighbor’s house. That’s when we were still getting along.

The girls were young and in middle school, ages 10 and 12.  I was 34. Gosh it seems like a lifetime ago.  Crazy! Anyway, the girls stayed with me, but on weekends he would come get them and let me just say that it absolutely killed me!  I hated that he took them knowing they would be going to her house.  I sat and cried and cried and cried some more. I cried out to Jesus.  My faith wasn’t quite as strong then as it is now. And, I was nowhere near as strong then as I am now.

At the same time all that was going on, my mom’s health was failing so I couldn’t run to her for help. She was in and out of hospitals and nursing homes.  And it was during this time that I really came to know that there is a God and that he hears and answers our prayers.  I specifically remember sitting on the couch in tears praying to God, please don’t take both of my loved ones from me! There was no way I could handle losing both my mother and my husband at the same time!

Time went on and I tried to be strong. We had Sophie and Zoey at the time (2 dogs). Zoey was my baby. She was a Jack Russel Terrier. I had just gotten her that summer.  She was young yet.  She got me through a lot though. Licked a lot of tears and cuddled with me.  God certainly brought her to me at the right time.  When the girls weren’t around, at least I had my Zoey girl.  It got to be early November and my husband came around and wanted to apologize.  I’m a big person and I accepted his apology.  Now, there are a lot of people that wouldn’t take a cheater back. They truly believe, once a cheater – always a cheater.  Now that I sit here divorced, I’m certainly starting to wonder.

I worked really hard to trust him again. Notice, I said “I” worked hard.  It’s true. I’m the only one who put any time into putting the relationship back together.  I was the one who went to counseling and did all the work.  Not him.  He didn’t like people trying to bend his mind.  This should have been a signal to me way back then.  If he wasn’t willing to work on the relationship….hmmm…hello???

The relationship got stronger due to the work I put into it.  Only to get to summer of 2017 and have him lose interest again.  Then in January of 2018, he said he wanted out.  Many that I’ve talked to are convinced he had a girlfriend.  Who knows.  Maybe he did.  That would make that statement true then…once a cheater, always a cheater.  I thought I had a pretty damn big heart for forgiving and trying to make things work though.  I can’t imagine what things would’ve been like had we had gotten divorced way back in 2005/06.

My brother believes he was holding me back.  Perhaps he was.  I’m going to school now and am working to better myself.  I was baptized and I became a member of my church.  Sure, right now I’m unemployed, but I’m praying to God that he opens a door very soon for me and I’ll have a job and get caught up on these darn bills.  This can not go on much longer because seriously, what will I do?  I don’t want to lose my house or car or anything else. I don’t want my utilities turned off.  Please dear God…open that door!! The other door has been shut and slammed for some time now.

Despite the fact that I’m unemployed and in a rough spot, please know that the divorce did not kill me.  I did not choose to kill myself.  I survived.  You can too.  I also got my first tattoo after my divorce.  The picture is below.  It means a lot to me.  I was nervous at first because I didn’t know if it was going to be painful.  It was not though.  Now, I would like to get more.  I’m a survivor! More than that, I will thrive! 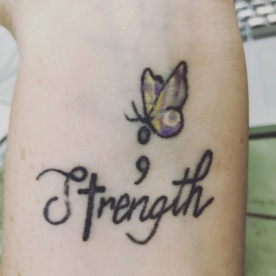 So, much of my tattoo may be self-explanatory.  The word strength reminds me that I am strong. and the first t in the word is a cross reminding me of my faith. The semi-colon is to signify that my life didn’t end; that it went on just like the sentence. Then, the butterfly signifies a rebirth of sorts. It might be hard to tell, but the butterfly is colored purple and yellow.  Yellow is my favorite color and purple was the favorite color of my little cousin Nicole who passed away a couple years ago. She was 7 and had Cerebral Palsy.  So the butterfly is also in memory of her.

I’d like another tattoo some day when I can afford it.  I’m not sure if I’d like a lion because I feel like it’s my spirit animal. Or, if I want to go with something in memory of my mom.  She loved angels and owls so I was thinking an owl with angel wings or something like that.  I was also thinking a hummingbird because my grandma and I shared a love for them.  I’m pretty undecided at the moment.  Tattoos are pretty expensive though so I’ve got plenty of time to think about it.  My bills will all come first once I have a job.

Wherever you are in this beautiful world, I wish you peace, love and happiness.

2 Responses to I Thought My Life Was Over…

Life at the Intersection of Faith and Mental Health