Wow! It has been awhile since I’ve posted. Quite a bit has been going on as well. First of all, I was pretty depressed and anxious about my power being out.  It was out from Friday November 2 until Wednesday the 7th.  I was sleeping here at home at night and it was cold. I slept in the family room on the big chair bundled in layers of clothes and two blankets, plus the dogs kept me warm.  During the day, I spent time at my friends house. She had given me a key to her home and let me spend time there so I could use her WiFi and try to get things done.  God bless her! School was getting difficult to focus on. I was trying hard to find ways to pay to get my power restored.  I did get a few donations to the GoFundMe I had set up so that was a huge help.  By that Wednesday, I had had enough of being without power and water and had no luck in finding any assistance so I called Consumers Energy back and just said I need my power back. Can you take the $55 and put me on that payment plan you offered?  This time I talked to a really nice woman. She said she would take the money and put my account on hold for 9 days and gave me the name of another place to try for assistance. So my power was turned back on! Hallelujah!! I did lose all the food in my refrigerators/freezer though.  I had just went shopping too. So that was a bummer.  I tried calling the place the woman at Consumers recommended but they just referred me back to DHS. It was a nightmare.  So when Consumers called me back we just put me on the plan which is $193 a month.  It’s pretty steep I know and I’m a little nervous because it’s not the only monthly bill I need to worry about.

On the night I lost power, I applied to be a Shipt Shopper (someone who grocery shops and delivers groceries). I did the first part of the application process that night. The second part, I did on Saturday morning in the parking lot of a McDonalds restaurant. I had to do video responses to their questions.  I was so incredibly delighted to wake up on November 9th to a text that said:

“Congrats, Dorothy! You’re an approved Shipt Shopper. Your shopper gear will arrive in a few days! Check your email for more information!!”

My friends, I will tell you that I literally cried with excitement when I read that text! I stood up and danced and praised the Lord right then and there. I am not even kidding! Finally, I would be getting some income.  There were some more things I had to do in the process. I had to go through some online orientations, alcohol training in order to be able to deliver alcohol and I had to go to an in person orientation training as well.  I’ve done all those.  I downloaded the app to my phone and took a picture of myself in the Shipt sweatshirt I got.  I’ll put that below.  The only thing left was to get insurance on my car because they needed proof of insurance and to be honest, mine had lapsed due to non-payment.  Here’s where my anxiety crept up again because I had no idea how I was going to pull this off as I didn’t have a lot of money in the bank.  I stopped by State Farm Insurance. That’s where I had insurance before and they quoted me over $700 to get started back up due to it being so long since I had insurance. That wasn’t going to work! So I came home and looked online and checked Progressive. I was able to get started online through them with $149. That worked for what I had! I was so grateful! So now I’m insured and provided that to Shipt. So as far as I know, I’m good to go. I just want to read through their online help again.  I will admit that I’m a bit nervous to do my first shops.  There are two reasons…. 1) Winter/Snow, my car sitting low to the ground and me not being very sure footed. I hope people keep their driveways, walks and steps clear and 2) Thanksgiving…it’s going to be busy I’ll bet.  Pray for me!  Other than that I’m excited!  Here’s me in my gear!  Here’s a link you should consider Shipt if it’s in your area!  Check Shipt out!

On the 7th, I also had my therapy appointment and my med management appointment with my Psychiatrist.  I had been struggling with focusing on school and had been in contact with my professor and had let him know the situation. He had suggested the possibility of taking a break and suggested I check with my academic advisor.  So I emailed her and filled her in on the situation.  I also talked with my therapist about it as well.  I had a very emotional day on that day because I broke down in tears at therapy and then again at my med management appointment. And, my blood pressure was up at my med management appointment as well.  I hadn’t had issues with anxiety in a long time but due to the issues with my power being off and struggling with money and bills for so long, it was coming to a head.  My academic advisor, therapist and Psychiatrist all agreed that it was probably for the best that I take a break from school and focus on the other issues in my life.  My Psych also said that he could prescribe a med for me to take just as needed for anxiety.  Because my rosacea had also started to flare up a bit and that was bothersome. He said the med would help with that as well.  He prescribed Vistaril.  I’ve only taken one so far since he prescribed them.

On November 12, I took a beginner knitting class offered through North Kent Connect. It was free to me and upon completion I get a $20 card to use in their thrift store. I get to pick up the card on Monday the 19th.  The class taught us how to cast on and do a wash cloth. Well, it was only a two hour class and I was a bit frustrated trying to get those needles to work for me.  Needless to say, I didn’t get much done at all.  I got to take everything home with me and hopefully I can figure out how to finish the thing.  I do have directions. And YouTube has everything.  Here’s what I got done so far:

I hope you’re not laughing too hard!  I got a little more than that done now, but I really struggled with it.  The needles they gave were called circle needles I guess and they’re made of wood.  I really want to finish it and be proud of my accomplishment.  It’s already been several days since I’ve touched it so I’m afraid I’ll be confused and not have a clue what I’m doing again.

As far as my activity goes, I’m trying.  The weather is getting colder and the snow has been flying on occasion.  The other day, Oaklee and I went on a two mile walk on the White Pine trail.  It was freezing cold but I was proud that I got out and did it.  The first mile was pretty easy, but the mile back, I started to feel the pain in my upper thighs.  Here’s a pic of each of us. This was at the end of the walk by the Rockford dam. 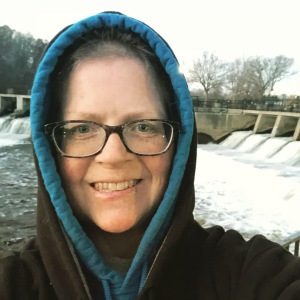 Me with Double Hoodies

After our walk, I decided to take Oaklee to TSC (Tractor Supply Company) to give her a bath at their self wash station. It was easier there than doing it at home.  It’s $10 and after 10 washes, you get a free one.  I already had one wash because of giving Kaya one the other day.  She didn’t care for getting a bath but I hope to do it more often.  Now I just need to get my Xena in there sometime.  Here’s a picture of Oaklee looking pitiful but cute in the tub: 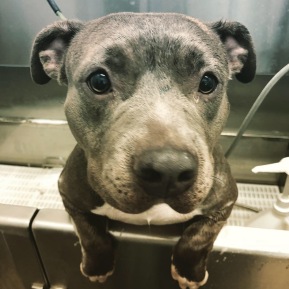 I’ve been doing so much cleaning around the house the last few days.  I got my huge refrigerator ready to sell and it’s now posted on the Facebook Marketplace.  I think I’m going to post it on Craigslist as well.  It’s a very large commercial size side by side.   It’s a Sub-Zero brand and I’m trying to sell it for $950 but hope to go no lower than $800.  I’m just hoping it sells because right now it’s just sitting in another part of my kitchen.

I’m struggling with the colder weather and not being able to get out as much. I know you can still walk and hike during this time of year but I don’t have a winter coat yet.  A woman from church did give me $30 in gift cards for Mel Trotter Ministry thrift store so I want to go there and see if they have anything.  I do want to stay active as much as I can.  And being outside is what I like most to be honest.  I already miss the lakeshore so much!  Maybe the weather will be cooperative and I can drive out there tomorrow after church?  Hmmm.

My GoFundMe is still active as is my PayPal.  My PayPal is over in the side bar.  I only say this because I am still so far behind.  But I know this is a tough time of year for everyone because Christmas is right around the corner and Thanksgiving is this coming Thursday! Unbelievable!

I could keep going but I think I’ll save some writing for tomorrow.

I wish you all well.  Wherever you are in this world, I wish you peace, love and happiness.

Life at the Intersection of Faith and Mental Health